Skip to main content
COVID-19 Update: What to Expect in Our Office

Our Commitment to Health and Safety. Read our safety protocols here. 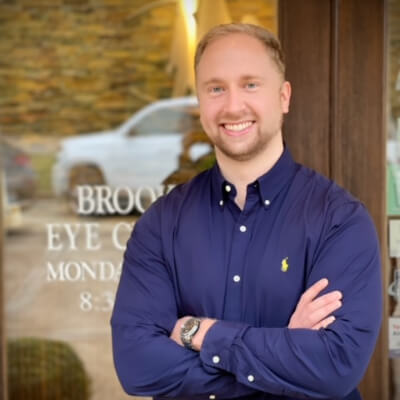 Dr. Troy Johnson was born in Columbus, MS in 1992, but spent most of his life growing up in Shannon, MS. He graduated from Tupelo High School in 2010. He began his college career at Itawamba Community College where he was nominated for Who's Who Among America's Colleges and Universities and received the Chemistry award in 2012. He chose to further his college career at Mississippi State University where he graduated Magna Cum laude with his Bachelor of Science in Biochemistry in December 2014. Dr. Johnson was a member of both Phi Kappa Phi and Sigma Alpha Lambda honor societies while attending MSU. He decided in August 2016 to further his studies to become an optometrist. He became engaged with optometry through physics courses taken in his undergrad program. Concepts of how light refracts as it passes from one medium to another really interested him and altered his footsteps leading to optometry. While attending Southern College of Optometry, Dr. Johnson traveled to Frome, Jamaica as a member of the Fellowship of Christian Optometrists to provide eye exams to many individuals in need.

He graduated from Southern College of Optometry in 2020. Dr. Johnson has several family members with vision problems who developed his interest in preserving and improving sight. He has a passion for the medical aspect of optometry and believes Brooks Eye Center has provided him the support and state of the art equipment needed to provide the best quality eyecare to all his patients. He is proud to be a member of both the American and Mississippi Optometric Associations.

During Dr. Johnson's free time, he enjoys spending time with family and friends, as well as his pets. His hobbies include attending college football games, swimming, bike riding, tennis, and playing board games.